Your page? Unpause your account to remove this banner.

Experience The Power Of The Rope
"..it has helped us unlock movement potential that we didn't know we had."
PAY WHAT YOU FEEL
For a limited time you can choose your own discount.
I really believe in the power of the rope to help Humans feel better in their body and minds and I feel that in this way I may be of service to get this healing tool out to more people who too could benefit from the experience like many of us in the community already have. For this reason I am offering a 'Pay What You Feel' option on the website. If you don't want to pay the full price then you have the option of choosing your own discount. More information further down this page and this offer only applies to the products recommended on this page.

I've been deeply obsessed with the art of human movement for as long as I can remember. It's the pursuit of this obsession that culminated in me winning Freerunning World Championships, a Red Bull Art of Motion & UK Ninja Warrior title and more.
Throughout the years I've experimented with many different methods of movement practices. Traditional ones such as Yoga to more modern ones like Functional Patterns, Knees Over Toes and Wim Hof to name a few. All of which I have learned a great deal from. But none have struck me in a more profound way than the rope..
The rope was first introduced to me by a man called David Weck who’s the founder of Weck Method. I travelled to California to learn it from him in person. He shared his passion for it and I saw what it can do biomechanically for the body, it blew my mind and I have barely put it down since.
In my lifetime dedicated to physicality and consciousness, I believe the rope to be one of if not the greatest method I have found to improve human co-ordination and movement. Rolling the rope has truly changed my life, and I believe it may do the same for you.
Let me explain.. 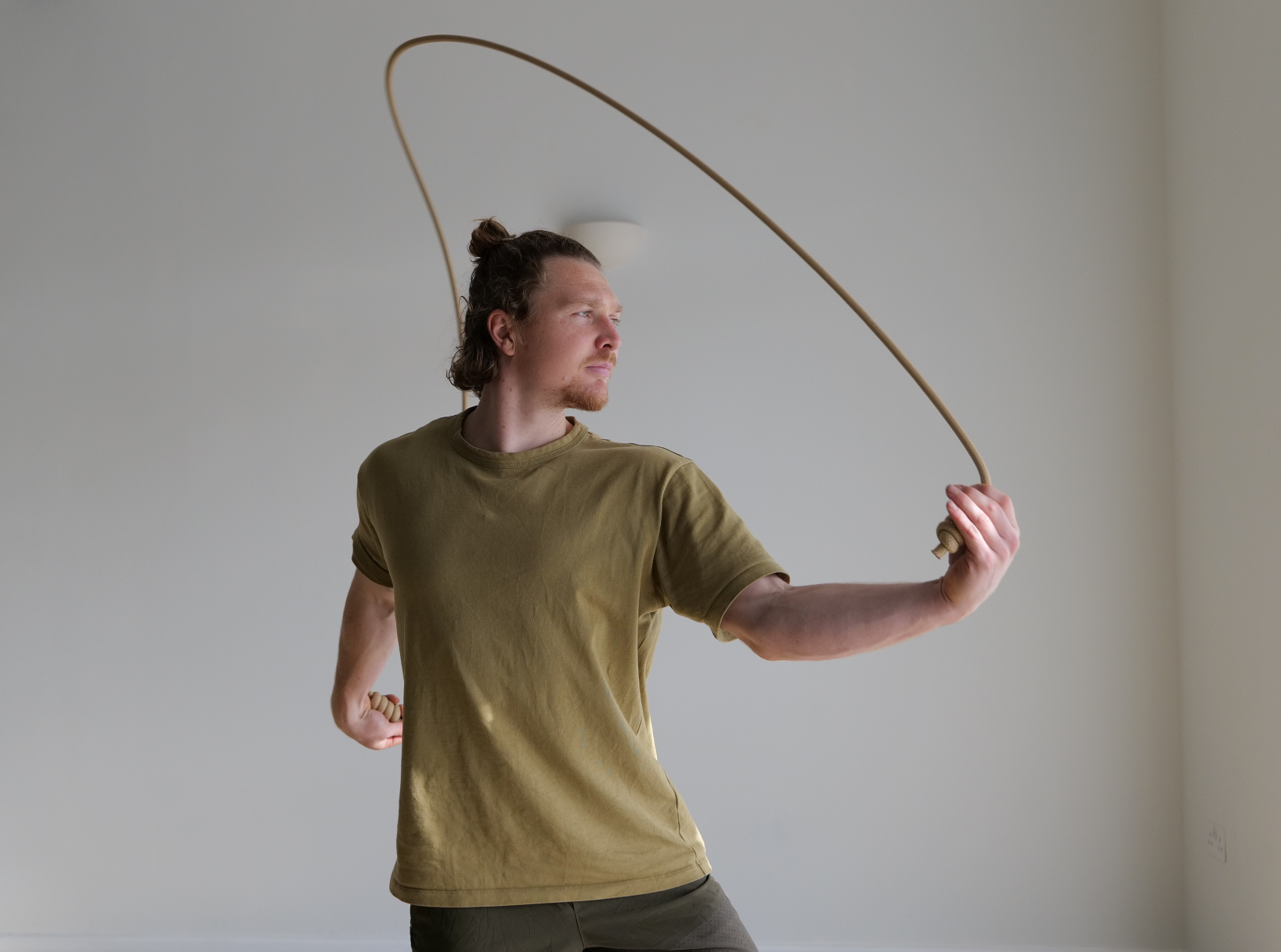 How The Rope Works
When you roll rope you get the chance to accumulate hundreds and thousands of repetitions of different movement patterns in a very short space of time, becoming smoother and more efficient each time you pick it up. Without trying, even the least co-ordinated among us will begin to move with more grace and fluidity in a short space of time.
More than an alternative form of movement, through time and repetition you are actually integrating patterns of quality movement into the body and the more reps of foundational movement you can do, the more efficient the whole body will become. The rope itself becomes the teacher, you have no choice but to move in a connected manner as one unit or the rope will hit you, and teach you very quickly where you are uncoordinated.
...What are the BENEFITS?
Move Like A Champion
Current UFC Heavyweight Interim Champion Cyril Gane seen here mastering movement with the Way of the Rope. 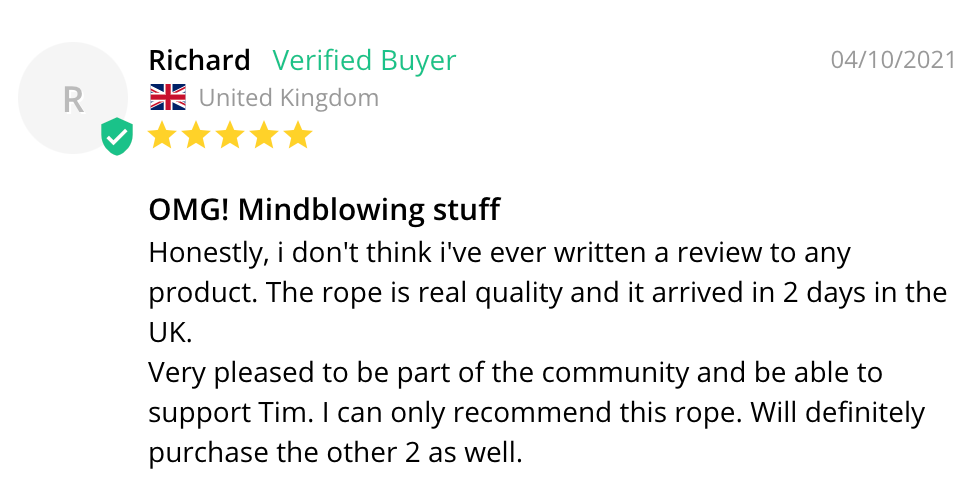 Introducing the Golden Teacher rope.
This minimal, high-quality, double-braided rope with natural golden tan color is the perfect tool to begin learning the Way of the Rope and is integral as you progress.
Comes hand-knotted.
Shipped in sustainable packaging. 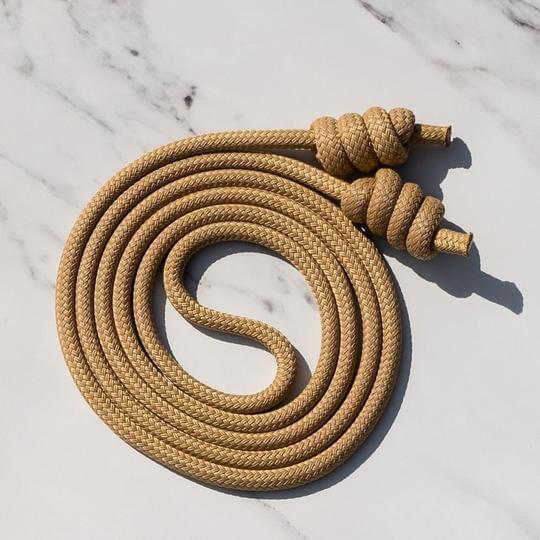 The Foundations Course is the complete beginners guide to the Way of the Rope. It is important that you build solid foundations right from the start to avoid picking up bad habits and patterns that will need to be unlearned later on.
You will have instant access to this course after you purchase and you will have lifetime access to its content. The content will also be available for offline viewing. 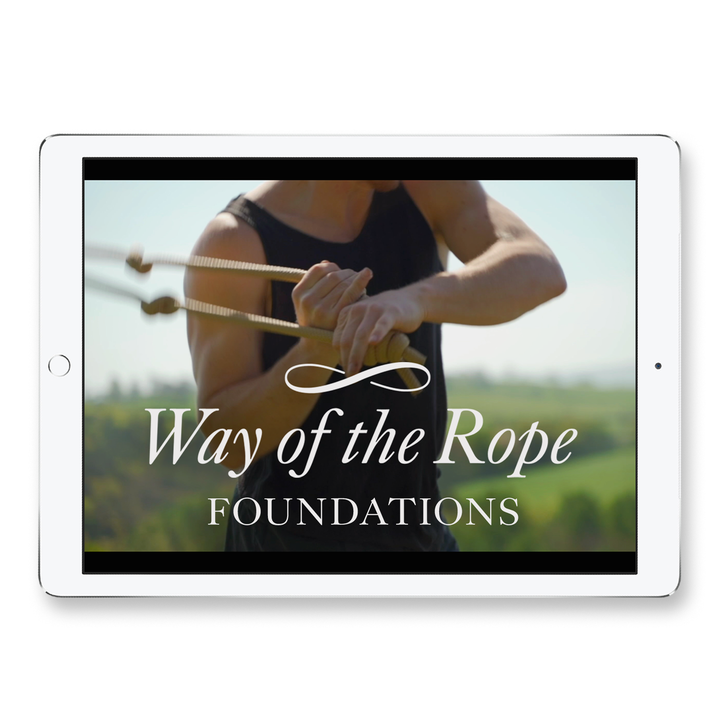 Here is what is included in the Foundations Course...

You will instantly receive access to a pdf guide and instructional video lead by Timothy Shieff where he gives you tips on setting up your rope and more tips on how to avoid making early mistakes in the movement. The video also covers the essential movements to help you get started with the Way Of The Rope. 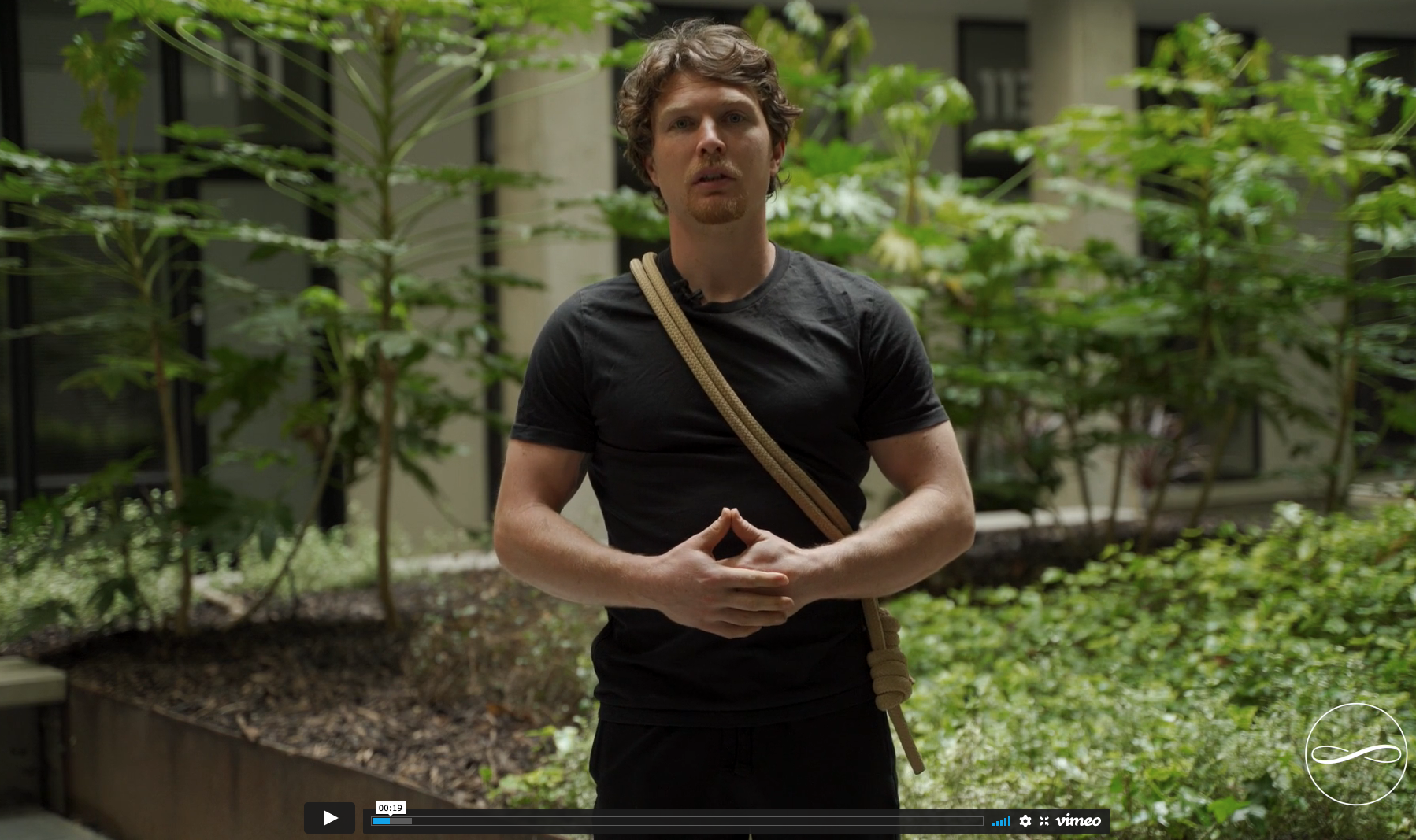 On joining the course you will have access to a growing, vibrant community of passionate, likeminded practitioners. This movement is building and the community is growing every day. This private access group, on Facebook, is one of the most valuable parts of the course and here is how you can derive value: 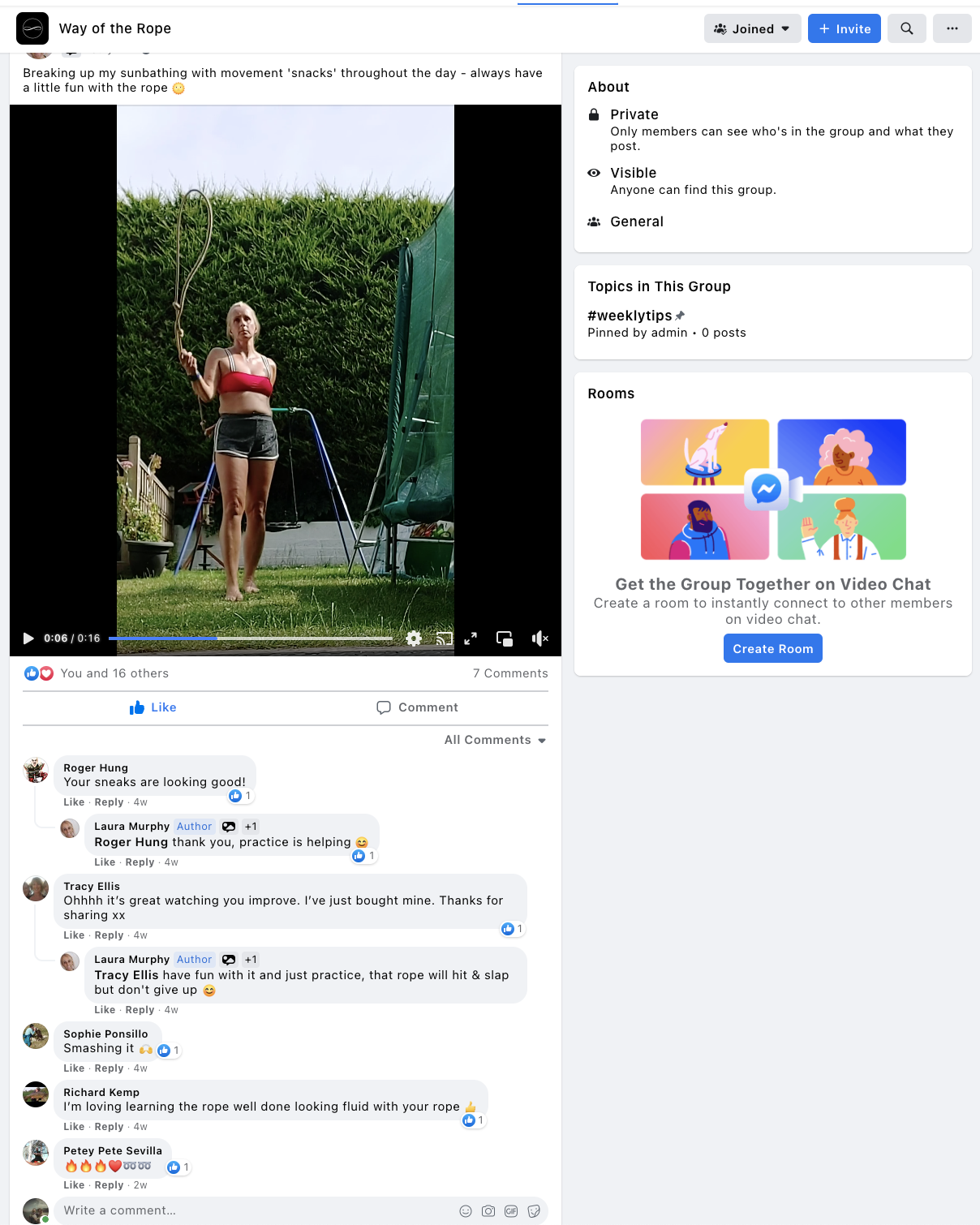 PAY WHAT YOU FEEL
Choose your discount if you need it -10%, 20%, or even 30%. No questions asked.
I really believe in the Power of the Rope to help Humans feel better in their body and minds and I feel that in this way I may be of service to get this healing tool out to more people who too could benefit from the experience like many of us in the WOTR Community so far have. For this reason I am offering a 'Pay What You Feel' option on the website. If you don't want to pay the full price then you have the option of choosing a 10%, 20%, or even 30% option.
Get Started With The Golden Teacher & Foundations Course..

Worst case scenario is you invest in "The Golden Teacher" rope and it ends up not working for you.. right? Well, if it doesn’t work for you, just send me an email to iam@humantimothy.co.uk and I will refund you 100% of your money immediately. Why? Because I want you to be here if YOU want to be here. It's not good for you AND for me, if you are forced to pay for something you get nothing from.

FULL Price (Not including discount, chosen on next page)
£49.50
Free UK Shipping.

If you are unhappy for any reason, let us know!

Does the size of the rope matter?
For those 6’2” and under, all of the ropes available are easily height adjustable by adding simple knots (this is covered in the Foundations Course included free with the Golden teacher). Shortening the rope can be a great way to tighten up patterns as it's pushing you to improve the flow of your movements. If you’re above 6’2”, feel free to reach out to me directly ( iam@humantimothy.co.uk) and I can cut a longer rope cut for you!
I am 50 years old. Can I do this practice?
Absolutely! That's part of the beauty of this practice, it's great for any age if you do it mindfully and listen to your body. If you have any fear or persistent shoulder injuries it may be best for you to start with our lightest Rope, Piccolo.
Can I use a normal rope?
You can do the Patterns and follow the Courses with any rope however the Ropes we sell are high quality and selected for a specific weight/thickness ratio that makes it optimum for this practise.
Why not just jump the rope?
Jumping rope is a great practise for cardio and light footedness but what happens when we jump the rope is that the hands go down as the legs come up and vice versa. In this instance the upper body and lower body are compressing together and working counter to each other.
The way we use the Rope however is to improve the cohesiveness of our lower body and upper body so that they work in Harmony together e.g. as the arms lift the legs extend (like a tiger pouncing).
As well as the top and bottom it also helps our left side and right sides talk to each other down the rope like a string and a cup, when one side moves the other feels it and has to act to stay synchronized. The circuit between our left and right hand is complete.
How hard is this honestly?
If you have 2 arms (or 2 working shoulders with prosthetics that can grip) you can do this. Our Foundations Course is 10 minutes long and teaches you the 3 most important Patterns to get you started. Some people can have these down solidly within the first session, for others it could take 3-4 times picking up the rope on separate days to really grasp. As long as you have some patience with yourself and can learn to relax and let the Rope lead a little you can master it swiftly.
One of the things I love about the Rope is just how quick most people seem to pick it up and I think that speaks to something natural and innate that the Patterns draw on in each of us.
How quick can I learn?
You can have Foundations solidly down in one week to a place where it’s fluid and enjoyable if you can be both persistent and patient with yourself and the practise. Start slow, slow is smooth and smooth quickly becomes fast.
Our Intermediate Course could take one month to really grasp all the Patterns.
It’s not totally necessary but the more you can use a mirror or film yourself whilst practising the quicker you will improve.
Where do you ship to?
Shipping is free within the UK (Mainland) and we do offer international shipping rates for those of you around the world. Click here (add link) to see all shipping details.
Will I need more equipment?
No. Although if you want to watch the courses then you will need a computer, phone or tablet in order to view them. Otherwise all you need is you and the rope.

Preferably no shoes either ;)
Will I need to upgrade the rope from the Golden Teacher?
That is never necessary. We recommend starting with the Golden Teacher because it has enough weight that you will find the foundational patterns easier as you get started.

We do have courses that help you further your skills and so people also like to try a different rope for a different feel such as the Piccolo (lighter and more meditative) or the Coeur de Lion (heavier, and more strength focused). So, it's not really an upgrade; rather it just diversifies the practice.
Way Of The Rope is perfect for..

Mindfully made and packaged

All ropes are still mindfully made and packaged by me. With love, from my home to yours. 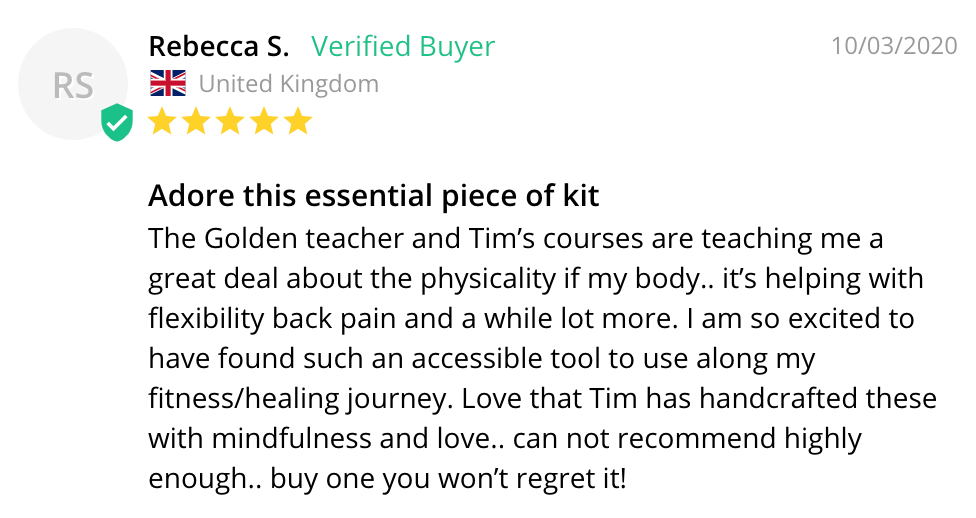 Get Started With The Golden Teacher & Foundations Course..

Worst case scenario is you invest in "The Golden Teacher" rope and it ends up not working for you.. right? Well, let me give you a solution for that.. If it doesn’t work for you, just send me an email to [email address} and I will refund you 100% of your money immediately. Why? Because I want you to be here if YOU want to be here. It's not good for you AND for me, if you are forced to pay for a program you get nothing from.

If you are unhappy for any reason, let us know!